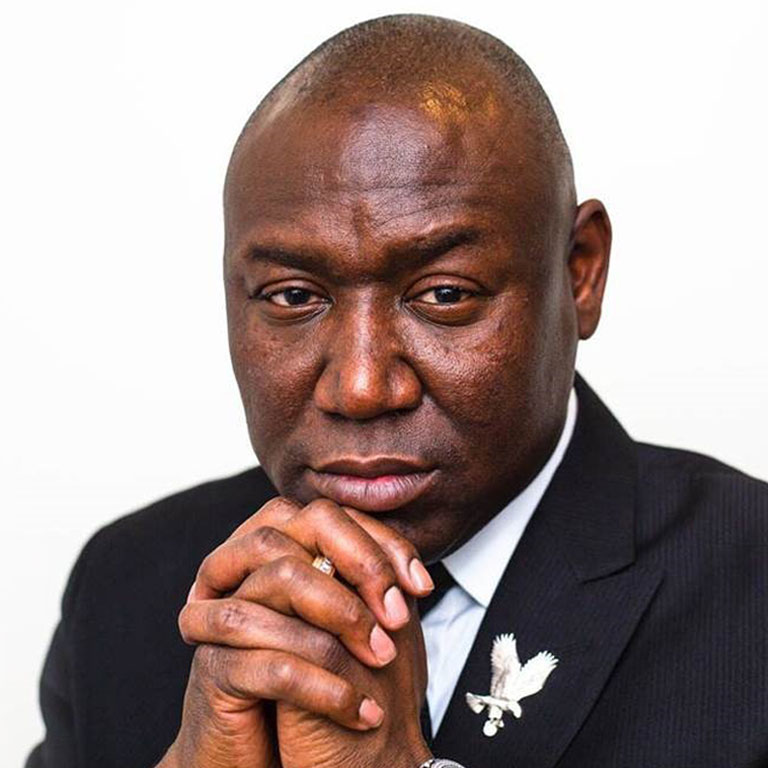 Through a steadfast dedication to justice and service, renowned civil rights attorney, author, and media influencer Benjamin Crump has established himself as one of the nation's foremost lawyers and advocates for social justice, earning the nickname "Black America's Attorney General." His legal acumen has ensured that those marginalized in American society are protected by their nation's contract with its constituency. He is the founder and principal owner of Ben Crump Law.

Crump's tireless advocacy has led to legislation preventing excessive force and developing implicit bias training and policies. National recognitions include the 2014 NNPA Newsmaker of the Year, The National Trial Lawyers Top 100 Lawyers, and Ebony Magazine Power 100 Most Influential African Americans. In 2016, he received designation as an Honorary Fellow by the University of Pennsylvania College of Law.

He has represented families in several high-profile civil rights cases, including Trayvon Martin, who in 2012 was killed by a neighborhood watch volunteer in Sanford, Florida; Michael Brown, who was killed in 2014 by a law enforcement officer in Ferguson, Missouri, Stephon Clark, who in 2018 was killed by police officers in Sacramento, California; as well as the residents of Flint, Michigan, who were affected by the poisoned water of the Flint River. In addition, Crump represented 9 of the 13 black women victims in the Holtzclaw Oklahoma City Police rape case in 2015 and worked on the precedent-setting U.S. Supreme Court case involving excessive police force against Robbie Tolan in 2008.

Mr. Crump is the president of the National Civil Rights Trial Lawyers Association and previously served as president of the National Bar Association. He was the first African American to chair the Florida State University College of Law Board of Directors and currently serves on the Innocence Project Board of Directors. Also, he is the founder and director of the Benjamin Crump Social Justice Institute.

Crump hosted the critically acclaimed legal docudramas Evidence of Innocence on TVOne and Who Killed Tupac: The Search for Justice on A&E. He served as executive producer of the documentary, Woman in Motion, about Nichelle Nichols, one of the first African American TV actresses. He is also a frequent contributor to Huffington Post Black Voices, CNN, and USA Today.

Crump's book, published in October 2019, Open Season: Legalized Genocide of Colored People, reflects on the landmark cases he has battled and how discrimination in the courthouse devastates real families and communities.

Crump graduated from Florida State University and received his law degree from FSU College of Law. He is married to Dr. Genae Angelique Crump. 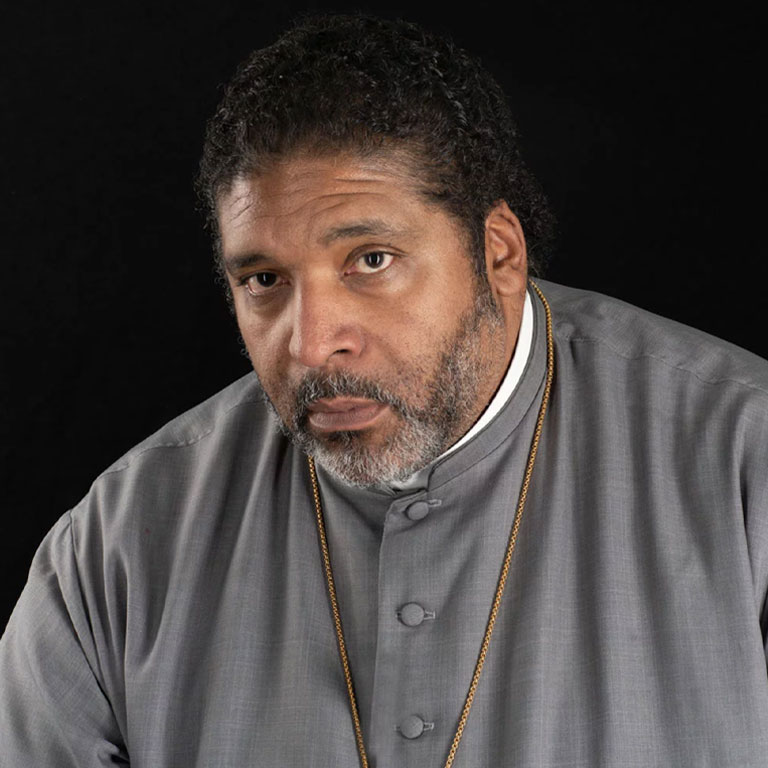 The Rev. Dr. William J. Barber II is the President and Senior Lecturer of Repairers of the Breach; Co-Chair of the Poor People’s Campaign: A National Call For Moral Revival; Bishop with The Fellowship of Affirming Ministries; Visiting Professor at Union Theological Seminary; and Senior Fellow at Auburn Seminary. For more than a quarter-century, he has pastored the Greenleaf Christian Church (Disciples of Christ) in Goldsboro, North Carolina. Since Rev. Dr. Barber began his ministry at Greenleaf 29 years ago, the church has sponsored efforts that have led to more than $12 million of community development, in addition to welcoming all into the body of Christ. He is the author of four books: We Are Called To Be A Movement; Revive Us Again: Vision and Action in Moral Organizing; The Third Reconstruction: Moral Mondays, Fusion Politics, and The Rise of a New Justice Movement; and Forward Together: A Moral Message For The Nation.

A highly sought-after speaker, Rev. Dr. Barber has given keynote addresses at hundreds of national and state conferences, including the 2016 Democratic National Convention. He has spoken to a wide variety of audiences including national unions, fraternities and sororities, drug dealer redemption conferences, women’s groups, economic policy groups, voting rights advocates, LGBTQ equality and justice groups, environmental and criminal justice groups, small organizing committees of domestic workers, fast food workers, and national gatherings of Christians, Muslims, Jews, and other people of faith. Rev. Dr. Barber gave the homily at the 59th Inaugural Prayer Service for President Joe Biden and Vice President Kamala Harris. He spoke at the Vatican in 2017 in response to Pope Francis’s encyclical “Laudato Si’: On Care for Our Common Home,” and he was invited again to speak at the Vatican in 2021, at a conference hosted by the Pontifical Academy of Social Sciences. On June 18, 2018, Rev. Dr. Barber spoke before the 5th Uni Global Union World Congress to more than 25 countries and was added to the Black Achievers Wall in the International Slavery Museum in Liverpool, England. He has had 10 honorary degrees conferred upon him.

Rev. Dr. Barber served as president of the North Carolina NAACP, the largest state conference in the South, from 2006-2017 and served on the National NAACP Board of Directors from 2008-2020. A former Mel King Fellow at MIT, he is currently Visiting Professor of Public Theology and Activism at Union Theological Seminary and Senior Fellow at Auburn Seminary. Rev. Dr. Barber is regularly featured in media outlets such as MSNBC, TIME, CNN, New York Times, Washington Post, and The Nation Magazine. Rev. Dr. Barber was named one of BET’s 100 Entertainers and Innovators in 2020, and he is a 2019 recipient of the North Carolina Award, the state’s highest civilian honor. Rev. Dr. Barber has also received the MacArthur Foundation Genius Award, the Franklin D. Roosevelt Four Freedoms Award, the Martin Luther King, Jr. Center’s Beloved Community Award, and the Puffin Award. 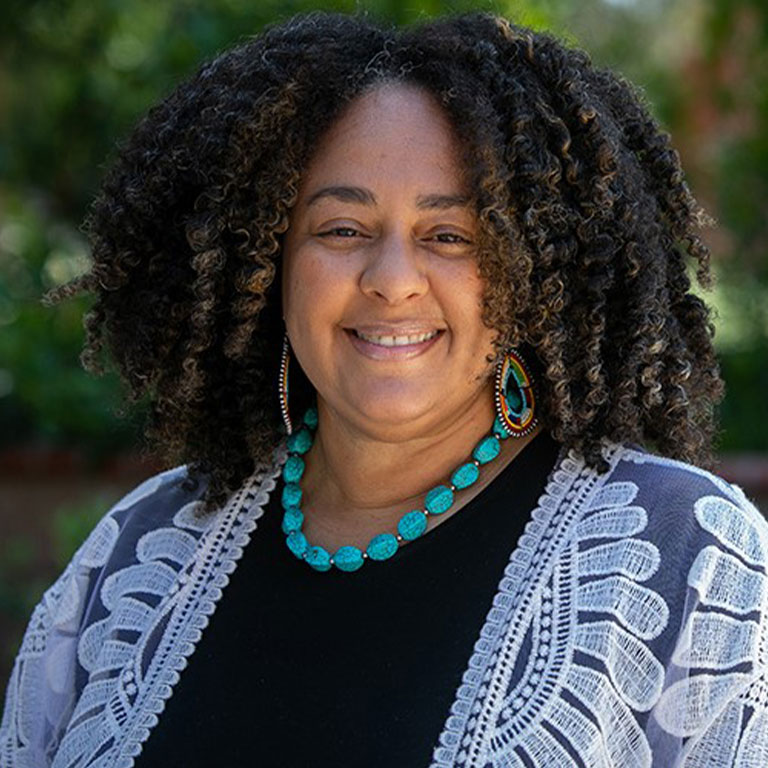 Jones Jolivet is an abolitionist organizer and scholar. Her praxis is rooted in Womanist worldmaking, prophetic spirituality, and Black women’s grassroots organizing to upend oppressive ideologies, systems, and social institutions while building liberatory and life-affirming conditions for flourishing. As a scholar committed to the work of “study and struggle,” she specializes in the intersectional study of race, racism, resistance, and social movements; abolitionist and rehumanizing pedagogies; spirituality and sacred resistance; and building antiracist institutions and societies.

Jones Jolivet is an associate professor in the School of Behavioral and Applied Sciences at Azusa Pacific University, where she teaches doctoral courses on equity and inclusion, leadership, and research inquiry. She advises a doctoral student research collective focused on Womanist and Black Feminist Thought and Praxis. She is co-author of a critical book, White Jesus: The Architecture of Racism in Religion and Education (Peter Lang, 2018). She is an organizer in Black Lives Matter-Los Angeles, where she is active in numerous teams and campaigns, such as People's Budget Coalition, Clergy 4 Black Lives, Sacred Resistance, and Progressive Justice Coalition. She is also a board member of Abolitionist Sanctuary, a newly-formed organization that trains civic and faith leaders in the work of abolition.