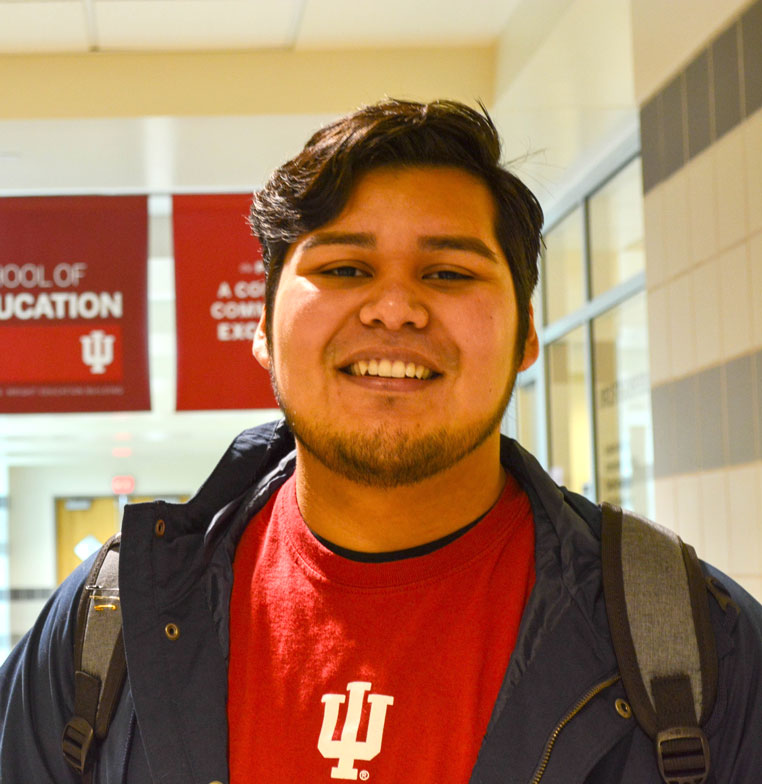 Indiana University junior Julian Luna is naturally modest. Despite his involvement in a dizzying array of activities at IU Bloomington, the Elkhart, Ind., native claimed, “I don’t feel like I’m making an impact. I’m just doing what I should be doing.”

If that’s the case, then whatever he’s doing seems to be working. As IU celebrates the living legacy of The Reverend Dr. Martin Luther King, Jr., there are faculty, staff, and students who, like Luna, have been carrying on his values of courage and compassion, whether they know it or not.

Luna, who is of Mexican descent—his parents first immigrated to Stockton, Calif., where he was born, before eventually settling in the Hoosier State—is a true leader when it comes to campus involvement, perhaps taking the lessons he’s learned from being the eldest of six siblings.

An elementary education major with an ESL (English as a Second Language) license addition, Luna is a resident assistant on the Spectrum floor in the Teter Quadrangle Residence Hall, a partnership with IU’s LGBTQ+ Culture Center, a program within IU’s Office of the Vice President for Diversity, Equity, and Multicultural Affairs (OVPDEMA). He has also participated in several other OVPDEMA programs, including the Groups Scholars Program and the 21st Century Scholars Program, while working for the Balfour Scholars Program’s Pre-College Academy and as an undergraduate staff member of the La Casa Latino Cultural Center, where he is a founding member of the new Latinx initiative.

If that wasn’t enough, Luna also teaches mini-lessons in a third-grade class at the University Elementary School, and facilitates a tutoring program at the Monroe County Public Library through El Centro Communal Latino, providing volunteers for ESL students to receive homework help and English tutoring help for their parents.

As meaningful as those experiences have been to Luna, only a few short years ago, he was leaning toward attending smaller, private colleges before a high school counselor first broached the idea of him being a Groups Scholars. Since he also qualified for 21st Century Scholars and received the IU Covenant, it made practical sense for him to come to Bloomington. Now, Luna looks back at Groups as one of his most pivotal moments in his transition to college.

“Without Groups, I don’t think I’d still be here. Groups was a way for me to transition into college, but also meet people who are still my really close friends today. The entire experience was amazing, and when I meet new students and they say they’re in Groups, I say, ‘Hey, I did Groups, too! We’re a team!’ It’s a great way to connect with someone, because you know their experience,” he recalled. “I just feel very fortunate that programs like Groups and Balfour do exist, because that’s like a segue to get students here and diversify the campus.”

“IU was the first place where I ever experienced racism. I come from a small city, but Elkhart is pretty diverse. Coming to IU, it was just a culture shock of the white majority and experiencing racism. For a while, I didn’t even want to be here. I wanted to transfer. Thankfully, I had an instructor who was very helpful and very kind—and she was white,” he said.

“It was relieving to see that not everybody was like that, and I can’t categorize an entire population because of one incident. I also started getting close with the people at La Casa. Race was never something I thought about. Yeah, I’m Latino, but as long as I work hard, I can be as good as anyone. But then, that incident happened and I started realizing race was something I had to think about, and coming to La Casa really helped me because they’re very accepting and very open. I just love that place. Lillian [Casillas-Origel, La Casa’s director] is my mom away from home.”

Instead of making the easy decision to transfer, Luna resolved to make things better.

I wish I could see people like me in higher positions and on the faculty, which is why I’m in education and I plan on pursuing higher education.

“I didn’t have a great experience living in the dorms as a freshman and here at IU, a lot of people can’t wait to live off-campus. I considered that, but then I thought about it and decided to stay on campus to make a difference, so I could help other students have a better experience than I did,” he said. “Even the negative experiences I’ve had at IU have helped me grow as a person and helped me find my community here. It just opened my eyes to see that the world isn’t all rainbows and butterflies. But I love IU and I know that they’re trying. That’s all I can ask.”

Luna himself is part of that process, using his identity as a member of both the Latino and LGBTQ+ communities to raise awareness among his fellow students.

“The intersectionality between the LGBTQ+ and the Latino community—LGBTQ+ diversity isn’t really here on this campus. It’s one of the most LGBTQ+-friendly universities, but when you look at the population, there’s a very small minority percentage. I thought that was problematic. When you look at my floor on Spectrum, along with another resident, we’re the only minorities on the floor out of 21 people,” he explained. “I went to NCORE, the National Conference On Race and Ethnicity in California in July 2016, and they had something called QPOC, which is Queer People Of Color, and I fell in love with the idea because when we met, we were all from that intersectionality, so not only did we have this perspective lens of the LGBTQ+ community, but we also had the lens of our backgrounds. Everything I learned from QPOC, I brought it back to IU. I even brought my notes when I came back from Thanksgiving break, because there are programs I want to facilitate for my floor from things I’ve learned.

“I recently had a program with the CUEs, the community educators, called ‘CUEsadilla.’ We had quesadillas at the event to feed them, but it was a conversation about race, ethnicity, and the LGBTQ+ community. I programmed with the CUEs because they were a resource I could collaborate with, and then we could really ramp up this program,” Luna continued. “We talked about what identity was, invisible identities, the struggles for a minority in the intersectionality in the LGBTQ+ community, and how it’s present at IU, especially on the floor. It’s also a great way for the Spectrum community to learn and be much more of an ally, and become much more aware of race and ethnicity.”

Luna has been similarly proactive when it comes to the fledgling Latinx initiative at IU, which is still in the planning stages.

“After our first meeting for Latinx, we conducted a survey to see what people were interested in doing with the program, how often we should meet, our mission statement, and all the specifics,” he said. “What really lifted my spirits was the turnout at the meeting, because not only did we have IU students, but we also had faculty come and a mother from the community came to offer her perspective because her son is part of the LGBTQ+ community. I thought it was amazing and so nice to see.”

Although he wears many hats, Luna doesn’t think of himself as a resource for his peers, likely because of his easygoing, friendly nature. But when he recalls a specific instance, it’s clear that his compassion for others has made a difference.

“For me, it’s usually just conversation between friends—never really advice. But an interaction I had at Balfour resonates with me. One of the students was genderqueer, meaning they didn’t follow the gender binary—male or female—and they also came from a Latin background. I’d noticed that during the program, they were very quiet. I don’t think anyone knew that I had a queer background, because I didn’t tell anyone,” Luna said. “I talked with that student individually, and it turned out that they were struggling and they just really needed someone to talk to. So after that interaction, I found myself talking to them every day, just to check up on them, see how they were doing, and provide any support from what I’ve learned to help them out.”

Beyond IU, Luna hopes to impart what he’s learned and what he’s passionate about to his professional career.

“I’d love to teach a class that’s completely diverse, which is why I love teaching at the elementary school. All they do is talk about diversity; that’s what they’re all about. It’s amazing. I teach mini-lessons with small groups of students,” he said. “I’m thinking about going to graduate school. My first plan was to graduate, teach a little bit, and then come back. I wish I could see people like me in higher positions and on the faculty, which is why I’m in education and I plan on pursuing higher education.”

“My mom—she’s my goddess, she’s my idol,” Luna continued, growing emotional when thinking about his mother. “She’s the reason why I do everything that I do. She’s a stay-at-home mom, but because I’m the oldest, I’ve seen how we’ve struggled and to be where we are now from where we began, it’s amazing. My mom, she was an orphan, but she instilled family values and the importance of an education, and just being proud of who you are.”

It seems pretty evident that the lessons Luna has learned at home—and at IU—are being put into practice.