Even after graduating, Mercedes Jones is still making an impact on the IU community and beyond 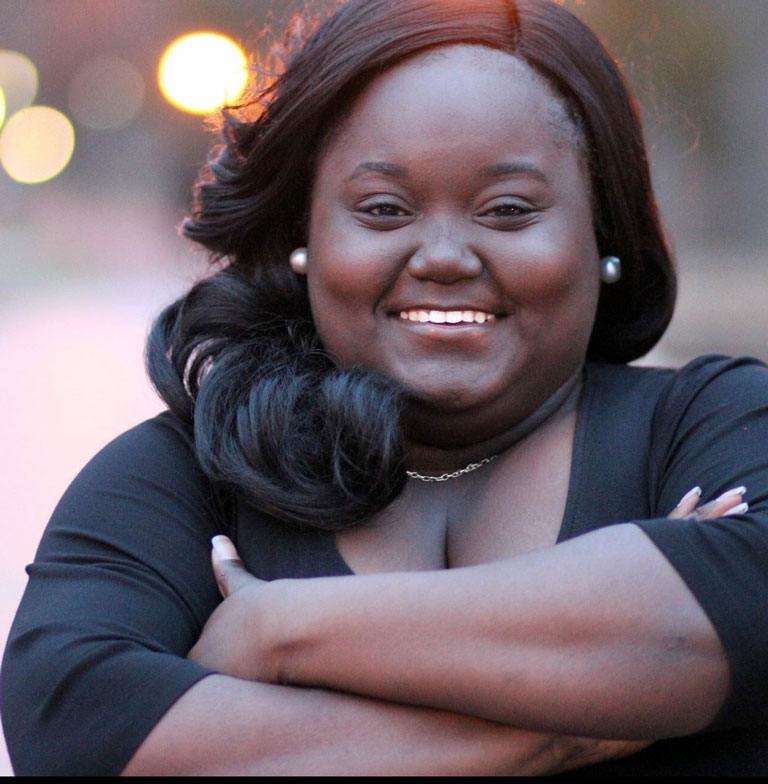 Having focus and drive is one thing, but Mercedes Jones is on another level. A 2016 graduate of IU Bloomington, Jones is well known for her long list of extracurricular activities as a student, most notably founding the Crimson Cupboard, a food pantry for students. Now that she’s has a full-time job in Indianapolis, one would think that simply due to time constraints, Jones might have to curtail her volunteer efforts.

“When the food pantry has special events or the other organizations I was involved in have events, I’m always there, regardless of whether I have to take off work or reschedule something,” she explained. “At the same time, I’m confident now, especially that it’s been left in great hands and if it wasn’t, then I would be there more. But it has been, so it’s not something that I have to concern myself with all the time. Yes, I do stay updated constantly. I talk to my new executive board every week and I want to know what’s going on, but they’ve taken the food pantry above and beyond even what I ever thought was possible.”

While there are many students, faculty, and staff at IU who emulate The Reverend Dr. Martin Luther King, Jr.’s values of courage and compassion through their actions, Jones stands out in a crowd. As much as her efforts have been lauded, her commitment to a cause and determination to finish what she started—and then some—are truly remarkable.

Jones, who graduated with a degree in public management with a concentration in nonprofit management from IU’s School of Public and Environmental Affairs (SPEA), currently works in finance for Defense Finance and Accounting Services (DFAS), where she describes her position as “a mix of disbursement, collections, auditing, and a mix of accounting and finance,” while processing payments for the U.S. Navy and Air Force.

The daughter of parents who were in the military (her father served in the U.S. Army for 25 years before retiring), Jones was born in Alaska before moving to McCordsville, Ind., a town east of Indianapolis. In addition to the Crimson Cupboard, Zeta Phi Beta, and Voices of Hope, Jones was also the second vice president for the National Pan Hellenic Council and a participant in programs administered by the Office of the Vice President for Diversity, Equity, and Multicultural Affairs (OVPDEMA)—the Hudson & Holland Scholars Program, as well as serving a student ambassador for both Hudson & Holland and Community and Schools Partnerships. An equally well-rounded student in high school—she was a dancer, part of the French Club, volunteered for the girls’ basketball team, and held down a part-time job—Jones had eyes for only IU when it was time to think about college.

“IU was the only school I applied to because I wanted to go to Kelley. I thought I wanted to major in accounting,” she recalled. “I felt like if I didn’t go to IU, I’m not going to college. I didn’t visit IU’s campus. I just looked at the business school.”

Upon arriving in Bloomington, however, not only did Jones switch her focus, to IU’s School of Policy and Environmental Affairs (SPEA), she experienced what a lot of freshmen go through.

The big thing IU did for me is it taught me how to step outside my comfort zone and meet people. Going out and meeting people is the only reason that I am who I am today.

“I was homesick. I just wasn’t used to being away from my family and then, I just kind of learned, ‘This is where I need to be.’ Something told me, ‘You need to be there. There’s a purpose for you going to IU,’ so I just got over it,” she said. “But now, looking back, I’m glad I stayed because that’s where I needed to be and I felt like that’s where God put me. The big thing IU did for me is it taught me how to step outside my comfort zone and meet people. Going out and meeting people is the only reason that I am who I am today.”

Even prior to starting the food pantry, Jones was known among her peers at IU for being willing to share her own food—whether through cooking or literally giving away her own groceries—with students who were less fortunate.

“Before I came to college, I didn’t know that people didn’t have groceries. I’ve been feeding the homeless my entire life, so I knew, but I didn’t know that I had peers who didn’t eat. I have friends who I met in my dorm freshmen year and I’m still close to now, who didn’t eat because they didn’t have meal points or because their parents didn’t have money to send them to buy groceries. I’m a freshman in college giving away my groceries, because my family has the means to feed me. This is a necessity,” she explained.

“My driving factor is always, ‘Why are people not eating?’ We want to look nice and have the best stuff, but food is basic and if you don’t eat, you can’t function. When I’d cook and I found out that people are not eating, you coming to my house to eat is a must, because I have it to give you. As somebody who just graduated college, I know that if you’re hungry and you’re tired, you can’t focus. So, if you’re not eating, it’s very likely that you’re not performing as well as you can in school.”

Inspired by her father, who would take her to feed the homeless as a child until the illness he suffers from, multiple sclerosis, slowed him down, Jones also volunteered for the Salvation Army while in Bloomington, eventually convincing some of her friends to join her. The irony of how she started the Crimson Cupboard is that though Jones had already done multiple internships—not to mention countless hours of community service—going into her senior year, she still needed to complete her official SPEA internship requirement.

“I didn’t know that I had to take a class and fill out paperwork, so I was stuck with taking summer classes, working two jobs and having to find an internship. So, I just happened to get on the SPEA careers website and saw a job posting that was five to 10 hours per week and very little work, which is exactly what I was looking for,” she remembered, laughing at how something small transformed into something so big.

“It just so happened that it was the complete opposite and in that internship, my job was essentially to conduct research, and survey the campus and different colleges about the need for food pantries and the needs of students, in regards to food. My internship ended in July, and I talked to a few of the deans at the different schools and several faculty, staff members, and students, and a lot of them said that people have been talking about a food pantry at IU for a long time, but nothing’s ever happened. In August, when school started, I decided to keep going anyway. I knew that it was something that was needed, so I knew that I had to do whatever I had to do to make sure that it was established and that it was stable before I graduated the next year.”

While she enjoys her current occupation, down the line Jones hopes to make a career out of working in the nonprofit sector, devoting her full attention to helping others.

“I love my job and I do a lot of volunteering here in Indy now. I do a lot of work with Wheeler Mission, the shelter that’s on Market Street downtown. I’ve been able to meet a lot of new people, still feed the homeless, and do a lot of different service-oriented things with my sorority, Zeta Phi Beta, even after graduation,” she said. “Working in finance is great, but I hope to one day move into the nonprofit field in full capacity, because there’s always need. I know I can’t do it all, but I feel like I can do as much as I can, and I’m going to keep going until I physically can’t go anymore.”