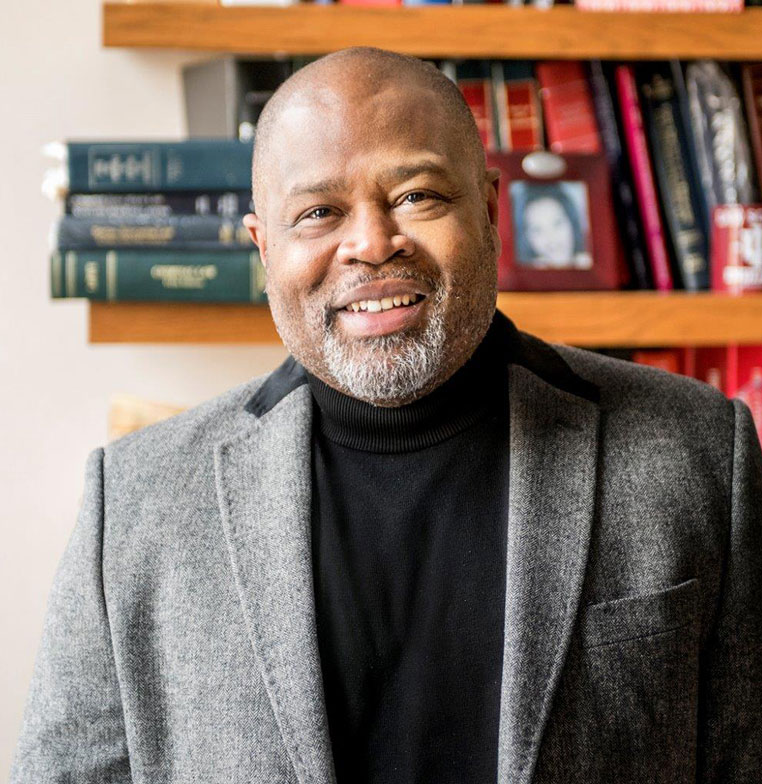 The way Kevin Brown sees it, in addition to the tremendous support of his wife, Dianne, much of his distinguished career transpired as a result of “happenstance.” The Richard S. Melvin Professor of Law at Indiana University’s Maurer School of Law in Bloomington attributes a great deal of his success to simply good fortune or being in the right place at the right time. But it takes an individual with the vision to see the potential in those opportunities to make the type of impact Brown has made.

Brown is one of a select group of people being honored for emulating some of the values of the Reverend Dr. Martin Luther King, Jr., specifically having the courage to make a change for the better in the lives of others. While he may downplay the significance of what he’s accomplished, it’s clear that his work has made a difference at IU and beyond.

A 1978 graduate of IU Bloomington’s Kelley School of Business, Brown is an Indianapolis native whose parents were both educators in Indianapolis Public Schools, with his father being the head of the math department at Crispus Attucks High School, an all-black school. One could say he was destined to attend IU, as both of his parents received their undergraduate and graduate degrees from IU. The tradition continued as Brown’s older brother, Darrell, who is a clinical associate professor in management and director of diversity at Kelley on the Indianapolis campus, got his MBA at IU Bloomington. In additional, Brown’s oldest daughter, Nichole, received her MBA from Kelley in Indianapolis, while another daughter, Crystal, received her bachelor’s degree in Bloomington, his son, Devin, is currently a first-year law student at Maurer, and his son-in-law, Antonio Williams, not only obtained his master’s and doctorate degrees in Bloomington, but is also an assistant professor at IU’s School of Public Health.

That being said, Brown considered himself an average student when he arrived in Bloomington from Indianapolis’ North Central High School. But at IU, his grades vastly improved, graduating from the Kelley with a 3.7 grade-point average and a degree in accounting. Then, he applied to law school at both Maurer and IU’s McKinney School of Law in Indianapolis, opting to return to his hometown after taking a year off to work for an accounting firm in Indianapolis.

Shortly after starting law school, the first of those “happenstance” moments occurred. Following a conversation with one of the two other African American students in a class of 200, he realized that with his GPA and LSAT scores, he could be admitted into the top law schools in the country through affirmative-action programs, and transferred to Yale after finishing second in his class in his lone year at McKinney.

After graduating from Yale’s prestigious law school in 1982, Brown returned to Indianapolis, where he was the second person of color to work at a major law firm in the history of the state of Indiana. He returned to Bloomington to join the faculty at Maurer in January of 1987, becoming the third tenure-track professor of color there. Brown acknowledges that during his early years teaching at IU, he wasn’t overly concerned with what was happening within the university’s African American community, instead focusing on getting tenure as a professor and his own growing family.

In another seeming coincidence—or perhaps destiny—Brown was invited to attend a summer legal studies conference with 24 other law professors of color, featuring several luminaries in the field. That conference launched an intellectual movement that became known as Critical Race Theory, which analyzes race and racism from a legal point of view and has since turned into a defining movement.

I walked away from that week-long trip thinking, ‘This would be a great experience for law students. I can send them here.'

“Critical race theory was one of the greatest intellectual experiences that any scholar could have. We engaged in these discussions about race and racism, and traditional liberal thinking in ways that frankly, I had never even thought possible. We began to develop, I really think for the first time within legal literature, an understanding of law that came from the experiences of people of color,” Brown explained.

“Looking back on it 27, 28 years later, my entire academic career was really shaped by those critical race theory discussions. It showed me that African Americans have a particular Afrocentric point of view about our treatment in American society, which radically differs from the dominant point of view. Critical race theory has now spread throughout the world, so I have delivered keynote addresses on critical race theory to scholars who are familiar with it and use it for their own purposes in India, Palestine, the United Kingdom, and Germany. It became an international movement and it’s the foundation of my academic writings.”

Brown began to get appointed to an increasing number of positions on campus, including serving as the director of the Hudson & Holland Scholars Program—a program administered by IU’s Office of the Vice President for Diversity, Equity, and Multicultural Affairs (OVPDEMA)— from 2004 to 2008, and co-president of the IU Bloomington Black Faculty and Staff Caucus, not to mention being one of only three black named professors on the IU Bloomington campus. He was also heavily influenced by black faculty in Bloomington who were also on campus during his undergraduate days, professors such as Professor Emeritus Dr. Portia Maultsby, Dr. Frederick McElroy, and Dr. Herman Hudson, and recently deceased Professor Emeritus William Wiggins and his wife, Janice Wiggins.

“Whenever Professor Wiggins would see me, he’d come up to me and say, ‘Kevin, to whom much is given, much is expected,” Brown fondly recalled.

In 1995, Brown applied to travel to India through the prestigious Fulbright Scholar Program and underwent another life-changing experience. His office at India’s most esteemed law school was next to the only untouchable, or Dalit—the group of people who have been historically discriminated against in India’s caste system—professor. Two weeks after arriving in India, this professor invited Brown to join him at protest rally attended by 80,000 Dalits at a soccer stadium.

“Here’s what shocked me—there was one sign in English over the speaker’s podium: ‘We Shall Overcome.’ There were three speakers and only one of them spoke English, so he was the only one I understood and that speaker says, ‘I’m a Dalit Panther. We take the name ‘Panther’ from the Black Panthers of the African Americans in the United States, because we see ourselves as one with their struggle,” Brown recalled.

“What I’m discovering in India is here’s some 180 million Dalits that look up to the African American struggle. They knew about Martin Luther King, Jr., Du Bois, Booker T. Washington, Malcolm X, Stokely Carmichael, Black Panthers—they knew it all. Of course, as an African American, I’m saying, ‘You know about our struggle?’ So, I’m finding this incredible respect for African Americans among the oppressed people of the world.”

Years later, while in South Africa, Brown visited a colleague he had met in India. Having some time to kill in South Africa, he journeyed to the land of the Zulu ethnic group with the intention of visiting a Zulu war museum. Mistakenly, he ended up at a Zulu basket-weaving museum, where he met Methodist missionaries planning a trip to Maputo, Mozambique. Predictably, he traveled with them to Maputo, and while there, came upon a revelation.

“I walked away from that week-long trip thinking, ‘This would be a great experience for law students. I can send them here.’ This is when I get the notion to create the first international program. What I’m trying to do is get African American kids to the developing world to see a different reality than what they’re experiencing here in the United States,” he said. “If there’s any people who are not global in their consciousness, but who need to be, it’s African Americans. This is what I dedicate myself to doing.”

Eventually, Brown made contacts in the Soweto township of South Africa and upon his return to Bloomington, set up the “Summer in Southern Africa” program, funded by the law school to send students to both countries. Between 1999 and 2001, 12 IU la students participated in this program, visiting the two cities, as well as an HIV/AIDS awareness program in Western Kenya.

In the fall of 2001, of course, 9/11 occurred, and the tragedy led to hesitancy within the law school about the program moving forward. But Charlie Nelms, IU’s vice president for student development and diversity, didn’t shy away, requesting that Brown put together a similar program for the university’s undergraduate students based on his international experience, so beginning in 2002, Brown developed a program for students to visit Ghana.

“Charlie Nelms asked me the provocative question, ‘If there was one country I could send African Americans to, what country would that be?’ And it was Ghana, because of the historical, ancestral connections to African Americans, Cape Coast Castle, and the fact that it’s an English-speaking country. In 2002, we sent 11 students and it was an amazing experience for them,” Brown said of the program, which has sent more than 300 students to the West African nation and is now run by OVPDEMA’s Office of Overseas Studies. “What I was trying to do was give these African American students a sense of seeing America through the eyes of Africans. I was trying to convert what John Ogbu, a Nigerian who received his Ph.D. in Bloomington, calls ‘involuntary minorities,’ like African Americans, into voluntary immigrants from Africa and the Caribbean, who tend to have more positive views of their experiences in the U.S. That alone should be a very empowering thought.”

Given Brown’s ties to India, it was only natural that he helped establish a program there. In 2015, he partnered with OVPDEMA’s Office of Overseas Studies to begin sending students to the country which sparked his vision.

“The program was driven by the desire to give the African American kids the exposure of what it’s like to run into people who respect you because you’re African American. It is a complete change from the dominant ideology that they’ve been brought up with for their entire life,” he explained.

“What I’m seeing from students who traveled internationally through these programs is what we were hoping for—empowerment. They have a new sense of consciousness of how much they can become. And they realize their capacity for making positive changes in the world is limitless. Along with that, they develop a much more global attitude, and become excited about breaking down the boundaries and going to different places. It’s amazing when you go with these kids, because you get to watch them change and mature every day.”

One thing is for sure: Brown, who celebrates his 30th anniversary of teaching at IU this month, can’t simply chalk up his impact on IU students to pure happenstance.